Although originating from the U.S. (Midwest), Demolish Metal Fanzine always takes pride in being an international fanzine as opposed to only covering a “local scene” and or just a single genre or style. Some of the first material I received for review was a great band from Sweden called OVERHEAT. One of my Metal friends’ always raves about these guys and upon hearing their latest demos I can certainly see why! One of their founding members (Janne) is a fellow “pen pal” of mine and we trade lots of rare tapes and such, so when it came time to figure out who to compile my first blog post on, it was a no-brainer.

The Story (from their bio):

Janne and Pelle have played together in different bands since their childhood. Their most well-known band being OVERDRIVE, with whom they recorded one 12″ EP and two albums before splitting up in June 1985. Janne and Pelle (who was then lead singer but after their split-up, switched  over to playing bass) decided to carry on and form a new band.

In December 1985 they were accompanied by drummer Paul Gustav’s son who had just left the band HIGH VOLTAGE. His “claim-to-fame” is two recordings with heavy rockers MERCY with one 12″ EP and LP.

The band now had a complete rhythm section and also a new name: OVERHEAT.

They started rehearsing and writing material and in November 1986 (when the band was completed with a singer) they had already written almost 30 songs! The singer’s name is: Gernot Iverson and he is (like Paul) an ex-HIGH VOLTAGE member as well.

Now with a complete line up they recorded their first demo Vol. 1 (in May-June 1987), which was produced, arranged, mixed, engineered, recorded and performed by the band. This demo has the songs: “Fight to the Finish”, “Realm of Freedom”, “L.J.M.S.”, “I Do Believe” and “High On You”.

Listen to “Fight to the Finish”

It was recorded in a barn with a four–track Tascam porta studio. The songs are mostly written by Janne Stark and arranged by the band.

This limited tape was not sent out to very many Metal Fanzines (if any).

Listen to “Realm of Freedom”

Their musical style could be described as “heavy, yet melodic/70’s-influenced hard rock”.

Prior to OVERHEAT, Janne was also a member of the excellent band called OVERDRIVE. So, this article would not be complete without letting you know about these Swedish rockers as well!

*This rare scan (above) was from their press kit, which appeared in many Metal Fanzines worldwide.

let’s take a trip down “memory-lane”!

Here is a Current article 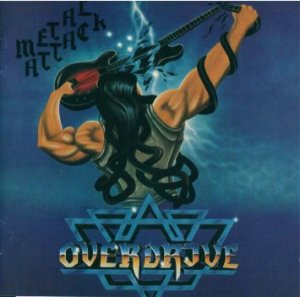 *Both of these great albums have been re-issued with lots of bonus tracks!

*logo by Curt Reinitz
*in order to transport you directly back to 80’s we will continue to keep the language in the posts “present tense” even though this is 2009.

*If you like this article & you would like to learn about more 80’s European metal bands, then please make sure you subscribe to our Metal Blog via RSS feeds (or sign up to receive our blog posts via email)…

5 thoughts on “Sweden’s OVERHEAT vs OVERDRIVE 1987”