It was at this time last year (Dec. 1987) when I first heard the group called LADY SABRE. They sent me a demo cassette with over twenty(!) of their melodic, hard-rock original songs on it that just oozed with mounds of talent and potential. They have sent their tapes all over the world and have gained a large, positive response to their music and in turn have managed to gain generous amounts of radio airplay and various articles and features in many magazines.

Since the “buzz” was so BIG on this Florida band throughout 87′ -they decided to go back into the studio (their own studio by the way, that they simply call “The Dungeon” -ed) and record an albums worth of new material.

This tape was released as an “official demo” to generate interest among record labels and the result of this is an admirably packaged ten track affair entitled “Under a Strange Spell”.

“There is something for everyone on this tape.This is the tape that we send to our fans and we ask them to write back and let us know which songs they like the best. The same five songs are mentioned every time” added Sandra.

The core of this band is the hard-working team of Sandra Thomas (Vocals/Keyboards) and Chris Warren (Guitar/Keyboards). They are a great duo who write, produce and arrange all of their songs together. As far as other members go, four different drummers were used on this project and Chris played bass guitar. Chris also produced and mixed the entire recording. Before I tell you about their songs, I must assert that this band is destined to break wide-open in the music business. They have so much to offer it almost hurts!

For starters, they pretty much have their own sound that should please almost every person who claims they enjoy melodic hard rock or well-polished metal. LADY SABRE are just approaching the song/music composition aspect in a way that differs from most “unknown” bands. They are always exploring new musical territories and have lots of experimentation going on throughout their songs such as: “Moon Song”, which is very original and unique (it even has a flute tucked away in there -ed), “African Origin”, which is very artistic and has many things flowing about ever-so-smoothly. The multiple keyboard segments, mood-setting guitar leads and the electronic “African-style” drums suck you into its moody, percussive atmosphere and make you want to hear more after it ends!

Sandra is a dramatic vocalist who has her powerful, crystal-clear voice under control at all times. Additional songs like “Fangs and Claws”, the slower/melodic “Lovers Kiss” and the massive anthem-like qualities of “Love from Afar” will clearly show this as this song is immense. I can just visualize this being played in arenas in front of thousands of screaming fans!

Sandra is also more feminine than most of those cunning women of metal that sell their looks instead of good music. Sandra is quite attractive, but her lungs are on display here! She also experiments around with multiple vocal harmonies and odd back ground vocals on the HEART/ABBA-like (vocals only -ed) “In Need of Your Heart” and “At the End of Time“. It is also on these songs that guitarist Chris Warren shows his master abilities with catchy lead guitar work and solid riffs. When he kicks in with his leads you can hear one of the finest “undiscovered” guitar talents at his best! “Strange Spell”, “Fear for Life” and “My Love for You” are all straight-forward hard rockers and just three more examples of his fluid guitar structures that complement the song’s contents along with Sandra’s soaring voice. 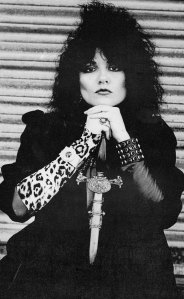 “Four of our songs won awards in the 1987 Music City Song Festival (Nashville, TN.) in the Professional Rock Category.” – Sandra

This tape is good enough to release on vinyl (as-is) and they even have over nine more complete songs and three more instrumentals to play. Four of their songs recently won awards in the Pro Rock Category in the 1987 Music-City Song Festival in Nashville, TN. They have also started their own publishing/production company and Chris impressed me enough to feature a special column for guitarists in each issue of DEMOLISH entitled the Bizarre Guitar, which he writes solely.

LADY SABRE are pretty impressive to say the least, but you say two people a band does not make, well, they have that under control too because they have just added: John Salzlein (drums), Richard Von Haiden (bass) and Steve Hardin (keyboards) to round out their line-up.

The only thing left for them to do now is to keep playing and promoting themselves until some record label and or management company comes knocking on their door in beautiful Florida to give this truly deserving young band some major backing!

Sandra and Chris are really cool and I am glad that I was able to feature them in this special extended review for the DEMO DUNGEON section.

If you would like to get their tape, they have a special fan club membership with kits (which includes: a bumper sticker, button, press-release, bio, photo and the demo tape) for only $5. Write to: LADY SABRE P.O. Box XXXX, Delray Beach, Florida. 33447 U.S.A.

*in order to transport you directly back to 1988 we will continue to keep the language in the posts “present tense” even though this is 2010.

Looks like Sandra and Chris were able to release their début LP in 1989 entitled “Enchanted”. Four songs from the demos made it on this release as well.