In addition to tons of great bands and albums coming out in the 80’s, there were also a lot of various magazines and smaller “fanzines” that were dedicated to all things Metal. This was not just an American trend either as Heavy Metal Music (and it’s dozens of sub-genres) was truly a world-wide phenomenon.

As a matter of fact, a lot of the bands that were able to come out of the “underground” and move on to bigger and better things cite the smaller fanzines and worldwide metal network as a key ingredient to their initial success. This was a hands-on, grass-roots type of community too. Everybody pitched in and shared their contacts, traded ads (for their up coming issue of their respected ‘zine) and also gladly distributed band and concert flyers. I think I will also start a band/show flyer gallery. I have hundreds of these myself. I think it’s interesting to see which band played where and with whom at the time! And all the flyer artwork was cool too come to think of it!

This close-knit network was very loyal to their favorite bands too. As a matter of fact, I still listen and support these bands (and this heavy form of music more than 20 years later) and I have run into hundreds of other die-hard “metalheads” from the 80’s scene that still listen to and buy new material as well. And best of all is the fact that in the last few years there seems to have been a huge metal resurgence and a lot of the originators returned to tour and or release new material. And of course there are many bands such as EXODUS, KING DIAMOND, OVERKILL, TESTAMENT, SLAYER, MEGADETH and lots of others that never even quit in the first place! Man, you have to respect that too. Obviously sometimes there were various band member changes, record label changes and or some time in-between releases.

I think we might have all of Europe to thank for that in recent times as their great fans are rabid Metalheads and have supported these bands through thick and thin and because of this, were able to get them to re-form, rehearse a bit and bring it back to the stage. And thank god we had lots of killer magazines and fanzines that were regularly covering and documenting this great music. 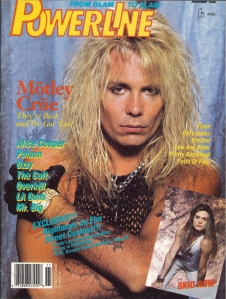 So without further ado, please enjoy a few scans of some of the great Metal Fanzines & magazines from all over the world. There are many more available and we will be adding more in the future. Please feel free to send any Metal Fanzine scans if you have any that should be included. I am only looking for issues from around 1982 – 1990.

If you published a fanzine within these years and would like to be included, then please get in touch by all means. If you are still “alive and kicking” in 2010 then I may be interested in doing an interview with you!

I am also updating the “special thanks” fanzine list in the Contributors section of DEMOLISH MAG.

*This was by no means a complete list nor is it in any particular order.

*Special thanks to My Gallery of Rock & Metalblog.

*And to Motley Crue Loyalty from Denmark (all Crue covers), Pat Prince (Powerline), Bill Hale (Metal Rendezvous International), Dan @ The Corroseum & to Chris over at Metal Core (one of the longest running zine’s in the world!).

*If you liked this slice of Metal History, there is plenty more to come. To stay updated on our vintage material posts, you can subscribe via our handy RSS feeds and or the “simple-simon gimme yer’ damn email” option, which is located below.