Reflections on A Metal Legend

Well, if you have not heard the sad news yet, yes our dear friend Ronnie James Dio (aka’ Ronald James Padavona) passed away this morning. Ronnie, who was a true Metal Trooper and music icon, lost his battle with cancer at age 67. All of us at Demolish Magazine want to send our heart-felt condolences to Wendy Dio and all of Ronnie James Dio’s family.

Upon awakening and reading the bad news from my email in box, my heart skipped a beat and I jumped up and immediately started frantically searching all over the internet to confirm that it wasn’t so! I have felt rather “blue” all day long when it was definitely confirmed that we did indeed lose our beloved hero.

Dio was blessed with one of Metals most distinctive voices and was one of the greatest dynamic stage performers I ever saw. I have been a Metal fan all of my life and I truly respect what Ronnie shared with us (all of his dedicated fans worldwide).

It’s really hard to put into words how hard this hit me and how much this stings. It is strange and yet so hard to watch your heroes die. One of my best Metalhead buddies and Metal Odyssey Blog owner said it best HERE with his most eloquent & heartfelt post today.

I am sure there will be many retrospectives and all sorts of articles in the coming hours and days but I feel the need to throw in my perspective. I am not really sure to begin but I just wanted to post my thoughts and reflections about his well-respected career and what DIO meant to me.

So what is the international hand “sign” or #1 pose/ gesture for every Metal fan in the world, in any local on the planet? Hint: \m/  <– and what in the world does that stand for?

Well, if you have to ask then forget it, since you have obviously been living under a rock and or have failed miserably to listen to something other than Burl Ives, Bing Crosby, Lawrence Welk, Kenny G and or Michael Bolton & Barry Manilow. Nothing wrong with those fine folks but we’re talking METAL here and who fronted the biggest, baddest, heaviest “Metal” band of all time? The one and only Ronnie James Dio that’s who and that band is BLACK SABBATH (otherwise known in more recent times as HEAVEN & HELL).

What an excellent release!

Although Ronnie did not invent the “Metal-Horns” as some like to call it, he did help to popularize it throughout the years by flashing it on stage and in hundreds of photo shoots. Ronnie said he actually learned it from his Italian grandmother and was used to ward off evil or bad luck (pronounced malocchio or maloik by most Metal fans).

Whatever its origins, it continues to live on in the legacy of all Metal bands worldwide since the 80’s (regardless of specific genre or locale) and I am giving full credit to sir Dio for this cultural phenomenon!

Ronnie started out professionally in 1967 (about the time I was born) singing in a band called ELF and after releasing three albums and a few years later having impressed Ritchie Blackmore countless times on the road (while opening for the mighty DEEP PURPLE), Dio ended up fronting some of the most legendary rock bands of all time.

First with RAINBOW (a wildly successful Deep Purple –Ritchie Blackmore offshoot), then with the legendary second coming of BLACK SABBATH and ultimately his solo career and band with his (last) namesake – DIO.

And then finally with the most excellent HEAVEN & HELL group, which featured original Sabbath members Tony Iommi and Geezer Butler plus his long time drummer in his solo band Vinnie Appice.

What a stellar lineup!

No matter what group or band Dio fronted, he was able to bring his own unique voice to the forefront and really add that extra something to make it sparkle. In reality, Dio was a rather short fellow, but he sure made up for that with such a powerful throat and onstage presence didn’t he!

Wow, I am so thankful that I was able to see him live in concert several times. The first time was on the début “Holy Diver” era + tour. I was a pimply faced freshman in High School rockin’ my cassette copy of the stellar Holy Diver release in 1983! Man, that LP was just great as DIO was on fire as he injected so many catchy melodies with the classic Metal riffage of a young axe-slinger known as Vivian Campbell. Team that with veteran bassist Jimmy Bain and drummer Vinnie Appice and you have quite the power- house lineup.

Ronnie and Jimmy played keyboards (which is something I like in my music) in the studio, but later Claude Schnell was added to perform keys for their live shows. Sadly, if I recall correctly, Claude was either hidden and or off to the side in the dark. Perhaps he was just chillin’ back by “Murray” (their evil mascot) on the large stage backdrop tapestry. 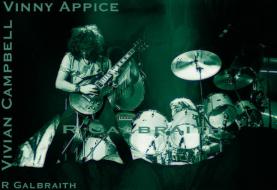 *I also remember watching early videos on MTV for “Holy Diver” & “Rainbow in the Dark”. They didn’t know quite what to do for a video, but you have to give them credit for trying something and getting it out there.

My second DIO live show extravaganza came with their excellent “The Last in Line” LP and later tour. This time they had a bit more p.a. equipment (i.e. speakers, amplifiers, pyro etc.) + an excellent lighting rig complete with some of the earliest lasers available! They opened the show with the uptempo “We Rock” and boy did they ever. My young ears (now a Sophomore in High School) were bleeding but lovin’ every minute of it.

Other standouts included the title track The Last in Line and “Egypt (The Chains Are On)”. The show highlighted drummer Vinnie Appice who turned in a notable solo, while playing 360 degrees around his massive kit and bangin’ those four large (Japanese Taiko drum-like) Ludwig toms!

“It was a good time to be in that band. It was perfect for us. Everything just fell into place. The ethic in rehearsal was amazing. The effort in the recording was just as good. Everybody wanted it to be great. We really believed in what we were doing and couldn’t wait to get that product out and have people hear it.” – Ronnie James Dio

Then it was Vivian’s turn to rip it up with his blistering guitar solo. This displayed his creative playing and excellent technique.

Third times a charm right? Correct. The third time I got to see the master of dragons and rainbows was in Nashville, TN. in 1988 with Savatage and Megadeth opening the show.

Those are two powerful acts to follow, but even though I love both of them, by the time DIO was into his second or third song, I forgot all about them! This time around the band featured new guitarist Craig Goldy (ex-Rough Cutt/Giuffria).

Even though Dio put out another six albums, this would mark the last time I got to see perform live in concert. Sadly, this will be the last time forever…thank you Ronnie for giving my life so much joy listening to your music and watching you do your magic! I will continue to listen to your music until I perish. 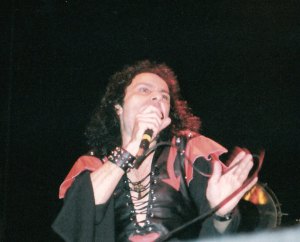 “RIP RJD. Horns at half mast. Such a huge loss” – Anthrax’s Scott Ian

“We are filled with great sadness at the terrible news about our friend Ronnie James Dio – our condolences and love go to Wendy and Ronnie’s family – Ronnie was a wonderful man and will be sorely missed.” – JUDAS PRIEST

Official original notification to Blabbermouth Media (from his wife Wendy)

Everyone please raise one last “devil horn” in tribute for the man, the myth…the LEGEND!