Man, I tell ya’ – it’s been a bad year for the Metal community. While I am still not over Ronnie James Dio’s recent passing, I just learned that another legend was taken from us. This time, it was Debbie Abono, who was a very well-respected band manager from California. She passed Sunday, May 16 after a battle with cancer. I want to send out my heartfelt sympathy to all her family, friends (and bands) on the passing of this great person.

Debbie might not be as famous as DIO, but behind the scenes she sure was loved dearly and held-down quite a roster of San Francisco Bay-Area Metal greats, including none other than: POSSESSED, FORBIDDEN, EXODUS, VIO-LENCE and SKINLAB! 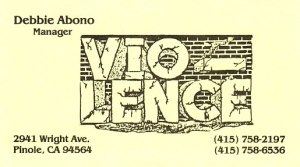 Debbie made such an impact on me and taught me how to get things done in this industry. In fact, I still have her business card that I kept for 23 years! I will post it here in memory of her and also her band VIO-LENCE (I will also be digging out that long-lost interview that she arranged) here on the Demolish blog.

Debbie was like a mother to some of the above bands and was their first experience with pro management. I know she put her all into her work. My first involvement with her was with the band VIO-LENCE. I was to interview them for Demolish Mag. and she was extremely accommodating and made sure everything went as planned and was such a pleasure to work with. As a matter-of-fact, I am pretty sure Debbie even traveled across the country with some of those bands in a little rented white van!

Those guys were a fledgling young band and she was there for them every step of the way. She was such a breath of fresh air in the often “snooty” band management industry. 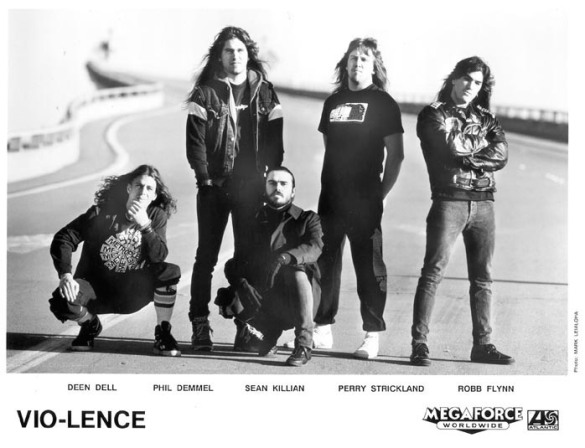 *One of the many bands that she put her stamp of approval on.

According to David Konow, author of the “Bang Your Head: The Rise And Fall Of Heavy Metal”, Debbie Abono was in her mid-fifties when she began to manage a band named POSSESSED. Abono started taking her daughters to MOTÖRHEAD shows, where the members of POSSESSED first asked her to manage the band. “There’s nothing to it,” they told her. “All you gotta do is get us shows.” Abono agreed and even allowed them to practice at her house.

Debbie with Lars Ulrich and Kirk Hammett from METALLICA

POSSESSED‘s association with Debbie Abono would be a “first” for both sides: Abono would be the band’s first manager, and POSSESSED were Abono‘s first managed band. Abono had no previous connection to heavy metal music other than as a concert designated driver for her daughters, one of whom was a girlfriend of guitarist Larry LaLonde. She agreed to manage and represent POSSESSED as long as bassist/vocalist Jeff Becerra and LaLonde finished high school commitments. Abono would go on to manage the [previously mentioned] bands from the Bay Area, as well as Death Metal bands like Chicago’s BROKEN HOPE and Florida’s CYNIC and OBITUARY. 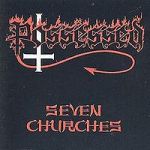 If anyone needs further proof of her work, then just read the “Thank You” list on almost every band’s albums (that she touched in and around the Bay Area scene) and you will see how many countless times she was name-dropped! She is also featured in the VIO-LENCE documentary on DVD, which clearly demonstrates all that she did for her bands.

“Sunday was a very, very sad day for all of FORBIDDEN past and present. We lost our first manager, mentor and mother to us all in Debbie Abono.” ~Craig Locicero (Forbidden Guitarist)

“I have to say what a heartbreaking moment it is for me to have learned that Debbie is no longer with us. She was extremely instrumental to EXODUS. We could not have done a lot of the things we did without her help and generosity. She is, and always will be, a true Bay Area metal legend, and no one has done more for that young upstart thrash scene than she. She will be greatly missed — by EXODUS, as well as so many, many other bands she had worked tirelessly for. Words don’t really do justice to what she has meant to us.” ~Gary Holt (EXODUS guitarist) 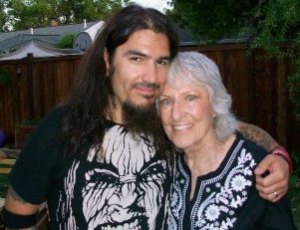 “Debbie managed VIO-LENCE [Flynn’s pre-MACHINE HEAD band], and toured with us in a van as manager, tour manager, mom, friend, and facilitator. Phil Demmel [current MACHINE HEAD and former VIO-LENCE guitarist] and I were her roommates at crummy Motel 6’s across America. Thinking back on it now, touring with a bunch of snot-nosed thrash metal-ers for two months at a time in a van, playing crummy clubs, isn’t the usual course most 55-year-old ladies take in their lives, but she was no ordinary 55-year-old lady. She was one of the biggest forces behind the Thrash and early Death Metal movements than I think most people will ever realize.” ~Robb Flynn (MACHINE HEAD) ex-VIO-LENCE member.

“I want to express my gratitude and respect for all she did for our scene, my band and me individually. She was like a mom and mentor. She was there for us in so many ways at almost all the local shows and especially on one of the best tours we ever did (DEATH ANGEL – ‘Act III’ / FORBIDDEN – ‘Twisted Into Form’ in 1990).” ~Rob Cavestany (DEATH ANGEL Guitarist)

In closing, I just want to say: “hats off” to Debbie; one of the real unsung heroes of the early Thrash scene! We appreciate all the hard work you put into making these bands a household name over the years. You will be missed dear! – Kinger 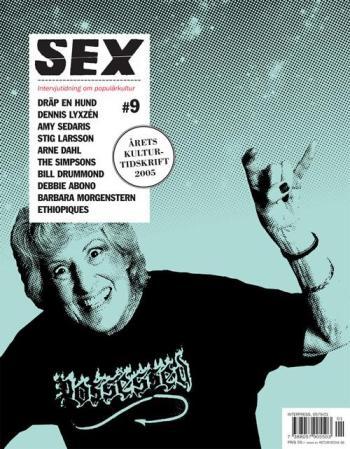