The Egos Have Landed

I know every single Metal blog (and website) will be reporting on this and as much as I tried to resist, I decided to cave-in and make a post about this historic worldwide event as well. The reason for my change of heart? Well, it was when I read this post from the great None But My Own blog. Of course I knew about the famous get together and all but I did not expect to see them all together on the SAME stage! Wow, now that was cool as I was impressed and at the same time intrigued by this.

So what was the hoopla all about?

Last December (09′) Anthrax, Megadeth, Slayer and Metallica announced they would come together for the first time at the Sonisphere Festival. There was a lot of skepticism if they could pull this off and if it would ever become a reality. I am sure lots of debates and arguments immediately ensued over the lineup, what could happen and all the other “what if’s”. 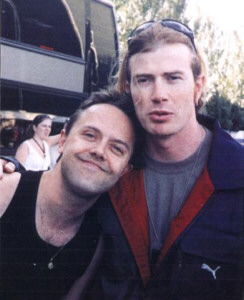 I agree, all that was silly banter and nonsense, but you can’t help but wonder about some of those things and a zillion other silly things that “could” happen.

So what is the real reason for all of these intense debates from the comment trolls that patrol the various Metal blogs?

It’s no secret that Dave Mustaine has had a beef with 3/4 (Lars, James & Kirk) of Metallica, 1/4 (Kerry King) of Slayer and a slight “mini-feud” with 1/4 (Scott Ian) of Anthrax last year. That puts him in a unique position compared to the other bands and various members.

Dave Mustaine initially approached the tour with skepticism. When asked about the tour rumors in a September 2009 radio interview with Eddie Trunk. Mustaine stated, “It would be foolish of me as a businessman to not take that opportunity, and it would be dumb of me as a band leader to not do that for the guys in my group and for the fans of the band.”

Could this be the biggest ego clash ever for Megadeth and Metallica?

Immediate thoughts of METALLICA and MEGADETH finally burying the hatchet (for good) after 3 decades popped into my head! I for one would really like to see this as I am tired of reading about it and besides, it’s not healthy for them to constantly go at each other in the press and behind-the-scenes like that. It’s just not worth it. Life is too short guys!

Fast forward to 2010 and it started to seem like this event really was going to happen as planned.

Says Lars Ulrich (Metallica) of this historic tour announcement: “Who would have thought that more than 25 years after its inception, Thrash Metal’s Big 4 would not only still be around and more popular than ever, but will now play together for the first time…!”

The Big Four: Metallica, Slayer, Megadeth, Anthrax, was presented by NCM Fathom and BY Experience and included nearly 4 hours of live performances and behind-the-scenes footage. When you watch those countless new movie previews on TV, did you ever think you would see something of this magnitude and hear the announcer say “The Big Four: Metallica, Slayer, Megadeth, Anthrax is coming to a theater near you”?

Turns out this event was presented in high-definition in over 450 movie theaters nationwide by NCM Fathom. What a cool idea, especially since it was in freakin’ Bulgaria right! I am not sure why it happened there as these bands are from America. Either way, it was a great night and although everyone expected them to appear the same night, I’m sure no one realistically expected to see them all on the same stage and at the same time! Yikes, now I wish I was there in person. Check out this historic video that’s been making the rounds:

As you can see, this was an all-star lineup playing the great “Am I Evil” by DIAMOND HEAD. What did you expect them to sing? “We are the World” or something (ha ha -ed)? I just wish they would have played the entire song—now that would have amazed.

Better yet, they should have at least switched instruments and maybe let Dave Lombardo from SLAYER or Charlie Benante (Anthrax) get behind Lars’ drum kit. Whoa, think about that one; Lombardo kickin’ it up a notch with the Metallica boys on a special Speed Metal version of “Am I Evil”. Dream on, as it did not happen.

What did happen (if you did not watch the above vid -ed) was the drummers for the “other 3” bands were set up off to the side of Lars’ drum kit and were bangin’ away like a crazy retro/futuristic tribal beat down (ala’ SEPULTURA). They looked genuinely stoked to be there and pounded away, but I am sure this was awkward for these three very talented drummers to essentially be “playing second fiddle” to Lars (who doesn’t even come close to Lombardo, Benate and Shawn Drover in the skills department). I did enjoy the part at the end when they did in fact start hitting cymbals and drums on Lars’ drum kit.

Did anyone see Mustaine hug it out with Lars and James before they started?

Everyone seemed to know what was going on except for Anthrax vocalist Joey Belladonna. Maybe they did not tell him what was to go down—maybe they didn’t tell anyone what the grand finale was going to be, as Hetfield, Mustaine and Belladonna all took turns singing. I am sure they just assumed everyone involved knew that legendary Metallica song (ahhh-hmmm) Diamond Head song! Other than that blip, it seemed to be a very cool show.

“After 29 years of doing this to reach this apex is just so fucking cool,” Tweeted Anthrax guitarist Scott Ian moments after the performance. “It was a monumental moment of epic proportions. I’m so high from the experience I can’t sleep.“

Some other cool spins on the epic onstage madness

(that would have been cool):

Metallica doing “The Four Horsemen” with maybe James and Dave tag-teaming the vox and with Kirk on the lead guitar solos.

Having Megadeth do “The Mechanix” but with Kerry King sitting in on guitar. That would be hella-cool. Yup.

Or having Metallica set up on one side of the stage and Megadeth directly on the other side. Have each band bang out their respective version of the track and then join together as one and rip it to shreds! That would make long time fans just lose it I am sure. So if you guys need some ideas for if/when you bring this show to the states then this is it! You read about it here first folks… 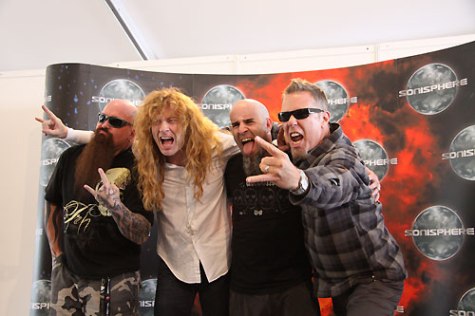 Now tell me this is not a truly awesome photo.

At the beginning of their festival run, the Big 4 of Thrash united for this photo shoot.

In this next group shot, it kinda’ looks like everyone was a little apprehensive during this photo-op or perhaps a little unsure of what to do. I see a lot of horns and black sneakers! 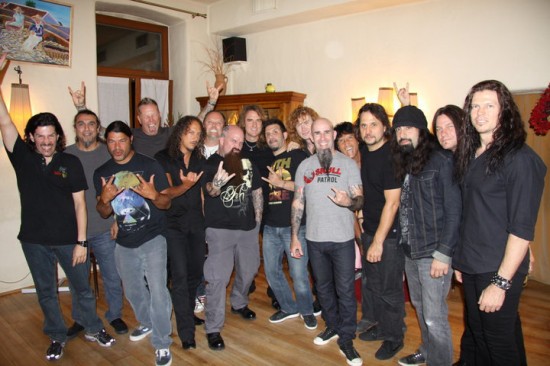 These pics make me happy. These bands pretty much paved the way for Metal.

I will admit though that I think if this happened twenty years ago it would have been more interesting. The bands were much younger and at the top of their game. 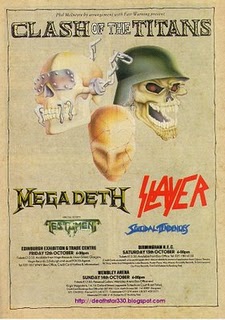 “The closest the world has got to having the “Big Four” tour together came in 1991 when Slayer, Megadeth and Anthrax were joined on tour by newcomers Alice In Chains (who stepped in for Bay Area thrashers Death Angel) on the Clash Of The Titans tour. The tour also went to Europe where Megadeth and Slayer performed without Anthrax and Alice In Chains but with Suicidal Tendencies and Testament.”

The only ones that are in top form (in my humble opinion -ed) are Megadeth and company.

The new Slayer isn’t bad but they are not as stellar as they used to be. I will give them credit for not jumping ship and for sticking to what they do from the beginning.

Metallica tried to come back with their latest effort but I basically wrote them off after And Justice and for All. I tolerated the Black album (and respected it for what it was) but after that—forget it.

The on going Anthrax drama is a bit long in the tooth and perhaps the band too. I am glad to see Joey back as I prefer that lineup. NO disrespect to the John Bush-era lineup but that just never seemed to be the right replacement for them. They made some great music together but all I can say is that it was just a “different” Anthrax. Not bad but certainly not great either.

I read a lot of complaints online about whether Anthrax should even be on this bill because they have haven’t done anything for years. But I suppose back in the day they were the sh** and I don’t have a problem with it.

Some other names were thrown around in the forums such as Testament, Exodus and OverKill. Apparently Anthrax sold more records than those bands and garnered more exposure around the same time as the other three, so they’re in the ‘Big Four’.

According to Slayer guitarist Kerry King, while speaking to Britain’s Metal Hammer magazine, King stated: “Maybe us, Metallica, Megadeth (and), I think he (Lars) even threw in Anthrax and I said in this day and age, I know we had that time together but how do you leave out Machine Head? There’s better options than Anthrax and that’s nothing against Anthrax, but they’ve just been in pieces for quite some time and that doesn’t make as much sense to me.”

At the end of the day it was an awesome night with such a nostalgic vibe. Everyone seemed to behave and “play well” together. I am down for The BIG 4 sharing the stage here in America for a repeat performance folks!

Yes indeed Metal fans, for now it seems that “the egos have landed.”