I finally found them.

Some of the last known remaining artifacts of my aging (that’s surely an understatement -ed) thirty-four year old 8-track tape collection. My-o-my, how I loved them so. It’s been a great few weeks over at the Demolish HQ. First the mighty “Vault-Diggers” unearthed those super-rare Metal Chu-Bops and now five working KISS 8-tracks!

Enter 1976…I was such an [innocent] wee lad. I think that would make me right around nine years old and still in elementary school—fourth grade to be exact. I am not sure what you were listening to in elementary school but I don’t remember seeing any KISS t-shirts or other hard rock bands around my school in the fourth grade. Perhaps most were still learning their nursery rhymes and or reading their Dr. Seuss books!

I didn’t know it at the time, but looking back, man, was Gene Simmons a marketing genius or what! To be able to reach out to grade school kids and turn them onto Hard Rock and perhaps a dose of early Heavy Metal even! Whether we take our hats off or raise the [Metal] horns up—that was no small feat for the time. But then again, I guess that is in fact exactly how and why this was able to happen as the times were a lot different back in the 70’s now weren’t they?

Enter specimen number one: KISS – Rock And Roll Over (CAF 87037) released Nov. 11th, 1976. Naturally most fans—myself included, will recall falling in love with “Calling Dr. Love” first. But “Makin’ Love” and “I Want You” had some decent riffage as well. I thought the cover art was pretty cool too. Check out where I marked out the previous owners name at the top and then added mine at the bottom left. 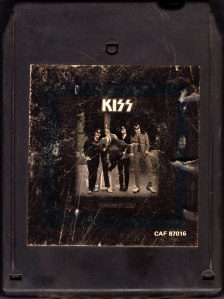 Enter specimen number two: KISS – Dressed to Kill (CAF 87016) released March 19th, 1975. I still love this KISS cover photo. As a matter of fact, I loved these 8-tracks so much that you will notice that I “autographed” every one of them. Ha ha, I guess I was trying to mark my territory. Either way, you gotta’ dig that funny looking signature. It was also in cursive and not printed, which I think was the standard up to that point in grade school? Maybe not…there are lots of cob-webs up there blocking out that content in my life.

“Rock Bottom” was it for me. I played the heck out of that track, and that brings up an interesting point. For those of you who were not even born yet (or perhaps never even held an official 8-track in your hands), let me break it down for ya’.

There were four “tracks” included on each tape cartridge and each track usually contained one to three  songs—depending on how long they were of course. This meant when your favorite song(s) were over, then you had a couple of options:

At this point, we’re landing on track/channel three. Let’s see, wait I was right in the middle of jamming on “Rock Bottom”, what’s going on here? Insert a loud “chick-chick” sound here, as the tape automatically switched and moved to the next channel and then suddenly here comes my “Rock Bottom” track slowly fading back in. Yup folks, love it or leave it, an 8-track tape could indeed interrupt a song and continue playing it on another channel! I guess it all depended on how they formatted the recordings but it did not seem like they put too much thought into it with regards to last song and channel placement.

Enter specimen number three: KISS – Hotter than Hell (CAF 87006) released on October 22nd, 1974. This was their second release and some say this tape was a bit “darker” due to some of the lyrical content. To me it shows the band starting to get away from the “live + raw” feel of their début as it features many more over dubs in the studio.

Personal favorites include the title track “Hotter than Hell”, “Parasite” and “Watching You”. Something I noticed that was typed on the back of the tape stated: (due to programming, there is :39 of silence between Program 4 and 1). This cracks me up! Although :39 back then was nothing compared to today’s “A.D.D” time frame, it still sucked a bit having to *wait for the jams to start-up again.

1974. I have to admit there are some excellent songs on here—many of which later became live “classics” but their performances on their début are somewhat sterile and or the production was lacking throughout IMO.

The album opener “Strutter”, the cool riffage [with party song tinges] of “Cold Gin” and the wildly popular “Firehouse” were the standouts. But my personal favorite on this release was always oddly enough—the very last track, “Black Diamond”. Those power chords and early Metal style riffs from Ace was just what the Dr. ordered for me!

Fun fact:  The music on these 8-tracks were indeed STEREO!

Last but definitely not least, enter specimen number five: KISS – Destroyer (NBLP 87025) released in 1976 on March 15. Clocking in at just 34:27, this is one of my favorite KISS releases ever. When it was released in early 76′ it surely rocked my nine-year old world!

First off—the album cover artwork and drawing was killer! Very futuristic, mythical and or majestic in some oddball way. Not sure if these are the correct words to describe, but it evoked something in me, something that might be indescribable.

Enter producer Bob Ezrin on this one. The songs are well-crafted and super catchy as well. Pop-ish songs that you could hum over and over and it included the (in)famous ballad “Beth”. There is not a bad track in the bunch on this release and boy did that super-sized poster of said artwork look great on my wall.

I know some of the lifelong KISS fans (or the card-carrying KISS ARMY members at least) might be in “hog heaven” with the goings on today at Demolish Mag. online, but to “put on the brakes” with this super-sized post, I will add in the “fairy tale” ending now and call it a day.

How did a nine-year old  manage to get these super cool 8-tracks?

I am not sure how or why, but one day out of the blue, my mom (who generally hated all things KISS) was at a local ceramic arts and crafts’ type place and the owners son (who was a teenager) needed some money and so he was trying to sell pretty much the only thing he had managed to collect—these 8-track tapes.

So with a major streak of luck, not-to-mention the stars and moon lining up in a perfect [Heavy Metal] way, she bought them…ALL and gave them to me for a birthday present later on that evening!

*He also included some nifty 8-track tape holders and about 15 other tapes (from Foghat, to E.LO., to Cheap Trick etc.) Yes I was on cloud nine for the longest and I would have to say this was one of the best presents ever in my child hood days!