To a time before Netflix, streaming media, You Tube, Blu-Ray and or even plain o’ DVD’s. An age + audience that did not have any such luxuries at their fingertips. No Google and or Wiki for instantaneous information on [literally] any band in the world! No i-Phones/smart phones, iPod’s or i-Pads either.

This would be the 80’s I am talking about ladies and gentleman, you know — back when the powers that be tried to lump everyone into some lame-ass tag called “Generation X.” I suppose some of you old dogs like me will be able to dust off the “b” cells and get some of those neurotransmitters working again to recall some of this…maybe not.

If so, I am sure you will treasure your memories of being able to see Hard Rock and Metal vid’s on MTV’s “Headbanger’s Ball”. I know I do. Man, I couldn’t wait for Saturday night to roll around to watch that show! I would even set the VCR’s timer to record each weekly broadcast.

So after the success of the “Ball”, which infiltrated millions of viewers homes’ [via local cable TV networks], bands and labels started releasing “home videos” as they used to call them. With the rise of VCR’s (and the fall of pricing for said product) the time was ripe for this marketing phase and everybody and their brother was putting out video tapes.

Most of these consisted of live concerts, extra backstage footage of misc. shenanigans and of course, your latest MTV video clip(s). Regardless of the content, it was great to be able to watch this stuff at your leisure and in your own living room. Pretty hi-tech huh?

Why am I blabbing-off about this?

Well, I’ve dug in the VAULTS again and recently uncovered 4 of my favorite 80’s METAL VHS tapes. First up: ANTHRAX with their excellent “Oidivnikufesin” concert footage from 1987. It was recorded at the [in]famous Hammersmith Odeon. The subtitle for this tape is “N.F.V”, in Anthrax-speak, that stands for NICE FU**** VIDEO! Love it…

Is that the Quaker Oats guys on Acid? Or an Amish ANTHRAX thrasher?

Being a drummer, it was a thrill to see Charlie Benante going off on the kit like the madman that he was/still is.

This guy was doing “blast beats” when most current Metal drummers were still in their diapers. And let it be known that he used these beats as a fill or variation, NOT blasting through the entire song ad nauseum. Ugh, don’t get me started on that topic!

Some highlights of the concert include the grinding riffage of “Madhouse”, “Armed & Dangerous” and the frantic set closer —”Gungo Ho”.

Hats off to Jon and Marsha Zazula from Crazed Management + Megaforce fame for their part (whatever that was) in putting this concert on VHS. Looks like they did manage to release this on DVD. The DVD has the full show from these Thrash Metal legends during their UK tour of 1987.

Useless press blurb: “Anthrax are notable for combining metal with rap and hardcore music early on and are classified as one of the ‘big four’ of thrash metal alongside Metallica, Megadeth and Slayer. In the UK they became well-known partly for this legendary concert”.

*Bar none, this is the classic ANTHRAX line up IMO! (Sorry Neil Turbin and John Bush fans).

On the flip-side of the pic’s above, you will notice the kick-ass live concert from Yngwie Malmsteen from 1985. Being long out of print, this VHS relic is pretty rare these days and it seems like only yesterday that I was jamming on this tasty slice of guitar mastery!

Yngwie’s unique brand of neo-classical metal and instrumental rock is well-known throughout the world and this VHS tape was a rare glimpse of their up n’ coming live show from that era.

The rest is “guitar shredder history” as they say!

4. FAR BEYOND THE SUN 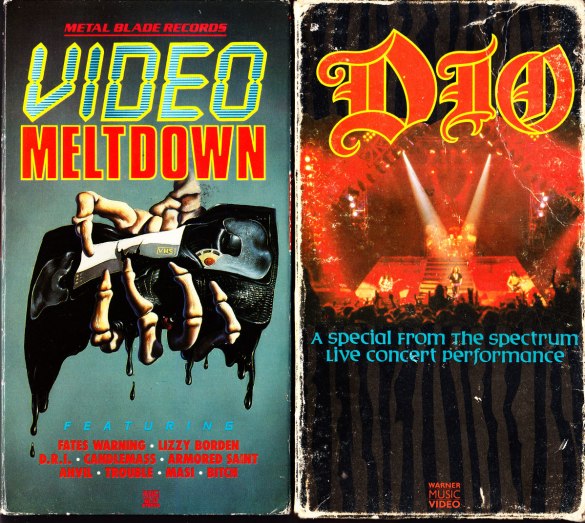 Up next, is an interesting Video Meltdown VHS compilation from the fine folks at Metal Blade Records. That’s right peeps, even the smaller indie record labels were getting in on the action of the home video boom —thanks to MTV that is.

I must confess that although I was psyched to own the “official” videos for Fates Warning, Candlemass, Trouble and D.R.I., the more commercial direction that the company was headed towards was rather off-putting (and so blatantly obvious) with the Hollywood sound stage style videos for [Betsy] Bitch, Masi, Anvil and Lizzy Borden. I like all of those bands, but this more watered-down version left a bad taste in my mouth.

I attribute this calculated approach to their partnership with Enigma Records (and thus Capital/Polygram, for which these were marketed through). I recently watched this tape again when I converted it to a DVD-R disc, and it was even more obvious after all these years. I am not sure if this ever made it to DVD but I did notice they actually released this on LaserDisc believe it or not!

Promo blurb from the back side of the VHS: “The first Metal Blade Home video features the best of Metal Blade’s bands plus it features home video footage of Fates Warning, Armored Saint, and Lizzy Borden shot in Metal Blade’s West Coast office”.

“You get to meet all the bands’ and see where Metal happens [I always wondered where that was!]…at Metal Blade’s office!!! It is a behind-the-scenes look at both the bands and the company plus all the great Metal Blade videos in one cool package. So sit back and crank it up for the first Metal Blade Home Video!!!”

“A Special from the Spectrum – Live Concert Performance” 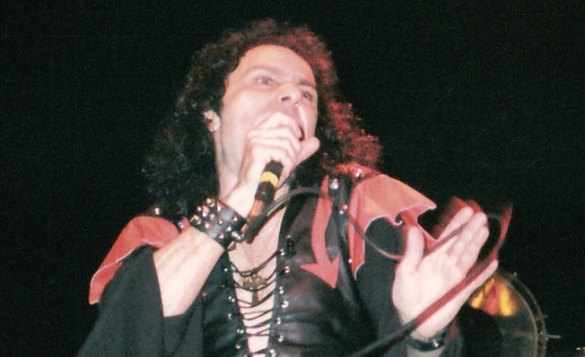 Now this one needs no introduction and or explanation. If you consider yourself a fan of the late great Ronnie James Dio (R.I.P.), then you will have this VHS tape in your collection. If not, then a portion of this amazing show was recently released on DVD under the name “We Rock” (2005). So go out and get it and redeem yourself asap…as this is 51 minutes of some of the finest Metal ever released.

Unfortunately it was bad timing finding this long-lost gem, as Ronnie passed away a few days after I originally located and converted this video to DVD-R! Yikes, what a bummer…I am still not over it.

*Thanks for strolling down memory lane with me. Hope you enjoyed the walk. Rock on! Special thanks to Pat M. for locating another copy of the DIO VHS.