Hats off to Machine Head for putting in a solid 20+ years of heavy music!

So how did MACHINE HEAD come about? 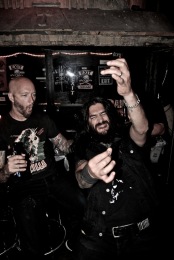 Well, sort of… it was more of a figurative thought as I didn’t have a band yet, but after watching [being blown away by] Metallica for the umpteenth time, I decided that I was going to start a side project, as I was unhappy in my then-current band Vio-Lence. Later that night backstage (or maybe while Metallica was still playing and we were watching from the stage-right backstage bleachers?) I turned to my friend, partner-in-crime and long time Vio-Lence fan Adam Duce, and said I was going to start a then-unnamed side project and asked if he would like to play bass. He eagerly agreed!

I had two songs written by then, the heavily Godflesh-inspired “Death Church”, and “Blood For Blood” (both songs that I had already brought to Vio-Lence, but they were not interested in jamming either of them). Vio-Lence had gone through numerous label changes, were unsigned again, thrash was dead, and the vibe in the band at the time was that the new tunes were going to take a more heavy rock/grunge approach—which seemed a bit crazy to me. Though I wasn’t thrilled with our new direction, I said I would stay on, and though no one seemed happy about me doing it; starting a side project seemed fairly reasonable considering our circumstances.

Four months later following a [thoroughly documented] AM/PM gas station brawl after an Unjust/Deftones show at the Omni in Oakland, I quit Vio-Lence and focused on Machine Head full time…Although that was still four months away, and for now, it was just a thought, an idea, a dream—that metal could be taken to a different, heavier place.

21 years ago, Machine Head was born!

Their early albums Burn My Eyes and The More Things Change show a more thrash-inspired approach and feature some kick-ass drumming by Chris Kontos and Dave McClain. The band changed their musical direction a bit for the albums The Burning Red and Supercharger, which resulted in some criticism because of the popularity of “nu-metal” at the time. However, they returned to form with the album Through the Ashes of Empires, which proved to be more popular with fans. 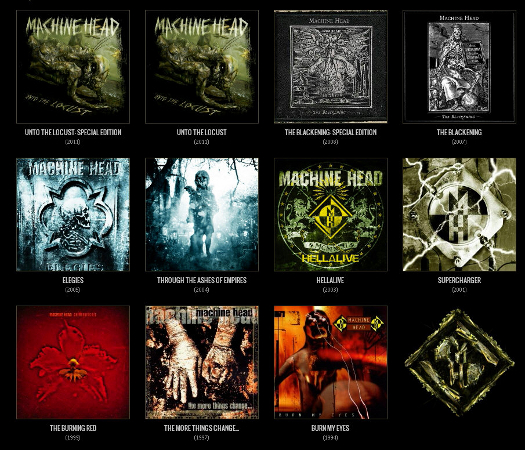 The band increased the complexity and technicality in their sound for the next album, The Blackening, which feature similar styles to the earlier albums, with complex song structures and guitar riffs. Their latest, Unto the Locust features heavier and faster riffs by both Robb Flynn and Phil Demmel supported by some faster drum patterns [blast beats] by Dave Mclain.

“[MACHINE HEAD] was just a thought, an idea, a dream—that metal could be taken to a different, heavier place.”

*above diary entry reprinted by permission