*Extreme metal emerged in the second half of the 1980s through three distinct musical genres with different principles, aesthetics and evolutions: grind core, death-metal and black-metal. Like all underground cultures, extreme metal is not a story which can be lived by proxy. And so it seems that some artists, whose works have been deeply affected by this, have actively participated in this scene since an age at which they probably didn’t know that their thoughts would become works of art.

The Altars of Madness exhibition project displays and brings together the works of art of this generation of artists who were affected by extreme metal, accompanied by a few others who are pertinent witnesses of this musical scene or who have brilliantly contributed to shaping its iconography.

In the late 1990′s, the public of contemporary art got acquainted with new personalities and references from the metal world through the works of emergent artists. While Torbjorn Roland chose to entitle a landscape photograph Buzrum, Mathew Barney was inviting musicians from some well-known metal bands to be featured in his films and Damien Deroubaix together with Banks Violette were making more and more references to the metal scene in their works. Until then, the previously heavy metal waves hadn’t had a real impact on the art scene and were only mentioned in some isolated pieced of work (like in a music video produced by Robert Longo or as references in the work of artists such as Albert Oelhen and Martin Kippenberger for instance). Conversely, extreme metal has become and important source of inspiration in contemporary art.

Extreme metal appeared in the second half of the eighties and is divided in three distinct musical genres: grindcore, death metal and black metal. Each of them has developed overtime its own rules, its own aesthetics and has evolved in a different way. Like any underground culture, extreme metal cannot truly be experienced when you remain a distant observer. As a matter of fact, it seems that most of the artists whose works are marked by extreme metal have been deeply involved in the metal scene since a very young age.

The ideas at the core of the exhibition Altars of Madness is thus to reveal the work of these artists, who have taken part in this underground culture. These artists who are willing to use it to feed their artistic practice, plus the ones offering some relevant testimonies of the metal scene and lastly, the ones who brilliantly contributed to the creation of its iconography.

The exhibition Altars of Madness originates from the C.S Journal, a monographic publication dedicated to that specific generation of artists.

Grindcore was born in the eighties as a radical extension of punk music. Grindcore music originates from the anarchist and anti-consumerist punk movement that emerged in the eighties. Most of the lyrics extracted from grindcore songs deal with political topics and condemn racism, war and hypocrisy (be it social or individual). A large part of grindcore musicians turned to obscenity (using gore, pornography, in their lyrics and so on…) under the influence of American death metal and in conscious attempt to provoke the audience.

As far as musical language is concerned, grindcore presents itself as something deliberately antimusical. The grindcore motto is clear: ‘noise not music’. Its birth followed the ‘bruitist’ experimentations made by Seige, Larm and its style is largely inspired from the musical velocity of bands like Repulsion. The more aggressive and violent is the music, the better for grindcore fans.

On the visual aspect now, grindcore appears as something completely unaesthetic. The use of collage and logo designs is supposed to drawn the attention, to disturb the viewer, in the same manner that the music is meant to be inharmonious and unpleasant to the ear. Grindcore music aims at illustrating and condemning in the same time the world’s abjections.

The first part entitled ‘Lucid Fairytale’ is characterized by a certain sense of radicalism in terms of discourse and aesthetics. Gee Vaucher’s political collages will be displayed in the exhibition to help the viewer to put back the origins of grindcore music into context. A political dimension is clearly discernible in the works of both artists Mark Titchner and Damien Deroubaix. Therefore, even if the references to grindcore are not explicit in Titchner’s work, the musical genre has genuinely pervaded his artistic statement. The spirit of radicalism at work in this part of the exhibtion reminds the one of the Modernist period, namely the common will to fight against conservatism.

This exhibition revolves around three main axes: an analysis of the political message that appears through the works, an introspective focus on questions related to the way teenagers deal with the very notion of death, and lastly, a nihilistic interpretation of landscapes.

Altars of Madness aims at investigating the formal embodiments of extreme metal and its influence in the work of contemporary artists.

Writing is a central element in Mark Titchner’s work. He is well known for the slogans he advertises on the walls of the city where his work is displayed. The messages appear as absurd commands to the viewer who thinks he must have been mistaken at some point. Mark Titchner also produced Kafkaesque sculptures visually alike to high technology machines but without any apparent functions. They have to be understood as some sort of trepalia, as instruments for psychological torture.

Titchner’s work serves as a metaphor of the capitalist system’s and marketing strategies failure, or in a broader sense, as the testimony of the irrationality of human behavior. 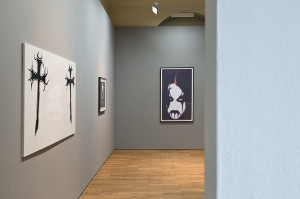 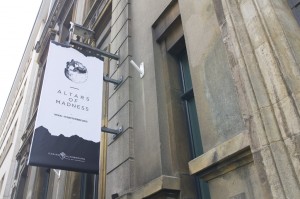 All photos ©WILI – Media Makers, Casino Luxembourg, 2013 (except where noted by Mark T.)

Mark Titchner is an artist who lives and works in London. Amongst other things he very much enjoys art, music and books.