*Lets get right to it, Nuclear Assault have just finished a very successful tour of Europe. They toured with Atomkraft and Agent Steel and sources say it was great. Special thanks [from the band] to all the overseas maniacs. All hail: beer, legal hash, beer, space cakes, beer, women with foreign accents, beer, red light districts, beer, tour buses, beer, and PD’s!

The Plague EP is out, so what are you waiting for — go get it!

That makes three pieces of vinyl the Nuclear ones have released so far. They are:

…all on Combat Records in the U.S., and on Under One Flag in Europe. They will be recording a new LP in L.A. but it won’t be out until spring of 88′. 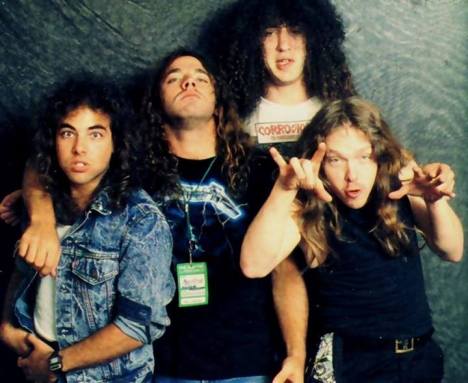 These East Coast dudes kick major ass and are personal favorites of mine, equally mixing metal, thrash and hardcore; effectively spitting out what is being called ‘crossover’ now.

Their music is rough and raw and in your face at all times. Lyrically they tackle pretty much anything that pisses them off and vocalist [and guitarist] John Connelly has a very unique — yet powerful vocal delivery style and range. Everyone knows by now that John and bassist Dan Lilker were involved in the early versions of ANTHRAX.

After much revolving door personnel, they ended up getting together with guitarist Anthony Bramante and drummer Glenn Evans (ex-T.T. QUICK) to round out this up n’ coming band from New Jersey. Move over ANTHRAX, these guys are coming out of the East Coast metal underground scene with full force.

Read on, as I get a snapshot of all things Nuclear in this interview from Dan Lilker and Glenn Evans. 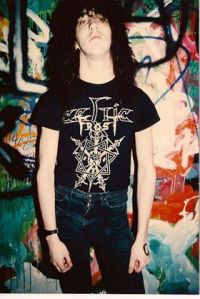 To start of with, how did you guys meet [originally] and when did you form the band?

Dan Lilker: I formed the band with John in early 84’. We got Anthony and Glenn through friends plus old members.

Who came up with the band name and is there any special meaning behind it?

DL: I did. It’s supposed to be REAL, not satanic or nothing.

How old are the members of the band please?

What was the hardest part in getting the band together? And the record deal with Combat?

DL: Keeping the faith when we were broke and depressed! We had a lot of labels interested and they had the best offer.

Were you an original band from day one?

Have you had any difficulties keeping a steady line up? That seems to plague many younger bands, or bands in general even!

DL: In the old days, but now it’s been solid for two years. 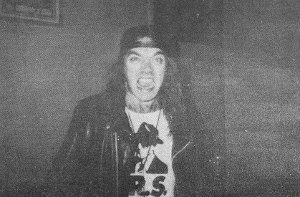 Your latest release is a six song EP entitled The Plague, are you happy with the final result and how well is it doing ?

DL: It’s been doing well but we don’t have any exact sales figures.

Who produced that EP and how long did it take you guys to complete?

GE: It was produced by Randy Burns. It took about a week to record and mix. 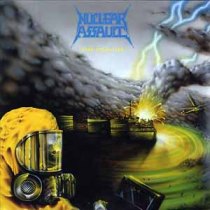 The Plague EP has a song called Buttf**k [which kills], have you received any complaints or any hassles with all these censorship people?

GE: Not from censorship people just from major record store chains — they refuse to carry it!

Your music is mixing metal with hardcore, which are you influenced by the most and who are some of your influences?

What’s the newer thrash | crossover scene like in your area? 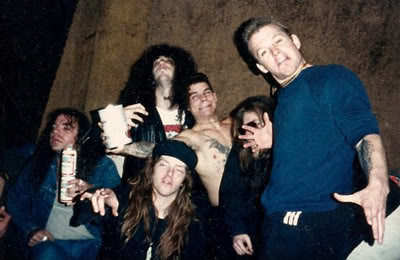 Nuclear Assault and the Cro-Mags at L’amour, Brooklyn NYC, 1986

You were one of the first bands to play this style right? And do you consider yourselves an originator for this style?

DL: People call us ‘originators’, we’re not gonna’ say that ourselves though.

I’ll bet you have a pretty loyal following at home? 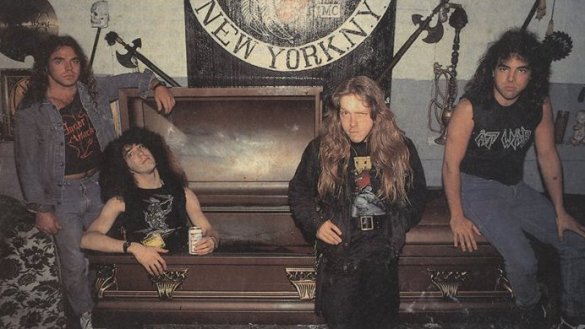 You have a new LP coming out soon right? Can you tell us more about it and when will it be released?

GE: It will be recorded in January at Music Grinder studios in Los Angeles, California. It should be out by spring of 88’.

What are some of the song titles?

Are you going to stick to the basic formula or sound for the new LP?

Will the new album be on Combat Records again (stateside) and Under One Flag Records (overseas)?

How are the labels treating the band these days?

GE: Combat is cooperating with us as well as MFN [Music for Nations].

Have you had any other label offers or are you under contract with Combat?

GE: Yes, we’ve had many offers, and yes, we are still under contract with Combat…that’s the problem — we’re working it out.

Does the band have any touring plans yet, what about overseas/Europe?

GE: We plan on heading back to Europe in the spring. We play as much as possible, whenever possible.

Who are some of the bands that you like to perform with? 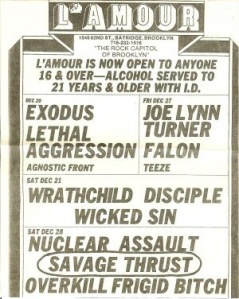 In your opinion, what is NA like live — if you were to describe it?

What is the wildest and or best gig that you’ve done to date?

DL: That would be impossible to answer. Not to sound conceited but all of our shows are wild!

Are the crowds different here in the states vs. overseas and where would you say you are most popular at?

DL: Not really. Same shit: banging, moshing (or trying to anyway) and [stage] diving! I guess we are most popular at home in New York, but it’s hard to say.

Do you like being on the road touring and playing out all the time?

DL: It was a Wednesday in New Jersey, with like thirty people there [laughs].

Do you still get stage fright sometimes? 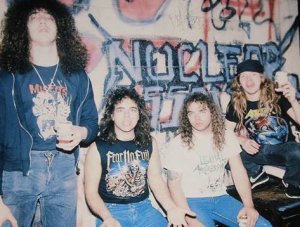 How crucial has touring been for the band to get out there…to be noticed worldwide?

DL: Absolutely crucial. We’re a “live” band by all means — that’s our element.

I haven’t seen you live yet, I assume you get a lot of slamming and stage diving at your shows, are you against it or do you mind?

DL: We get a lot of it. It’s cool as long as people don’t get hurt or f**k up our equipment!

Where do your lyrics come from and how is the songwriting split? Do you for research for lyrical content/inspiration?

DL: Not really, that would take out some of the emotion and spontaneity. The lyrics come from whatever concerns us or pisses us off. John and I split it [the songwriting] pretty evenly.

When did you start playing?

What did you learn from releasing your debut LP Game Over and looking back, are you happy with it?

DL: To get a better guitar sound. That’s the only thing that’s bad about it.

So where does NA go from here and what do you have in store for your fans (if anything)…any surprises?

DL: Who the f**k knows…hopefully up! Re: surprises, I don’t know, and if we did have a surprise we’re obviously not gonna’ say what it is, that would kinda’ defeat the purpose. 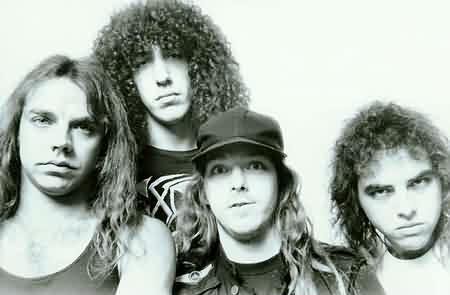 Are there any plans to make a promo video for a song?

What’s your definition of ‘good’ music?

DL: That’s too vague; I guess something that makes you want to hear it again. I mean, I don’t like the Scorpions for the same reasons I like Napalm Death.

Is there anything else you would like to add? See you soon at Bogart’s in Cincinnati. Thank you for your time and for hand-writing the interview answers!

DL: See you on tour! And be happy you don’t have to do long interviews [laughs]. 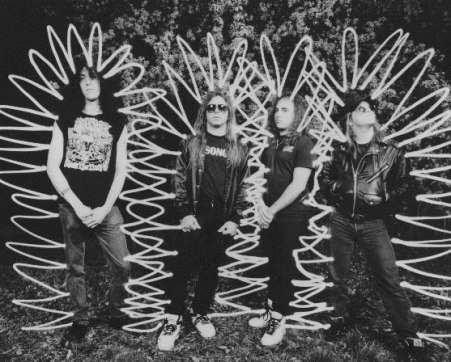 Live At The Hammersmith Odeon
1992 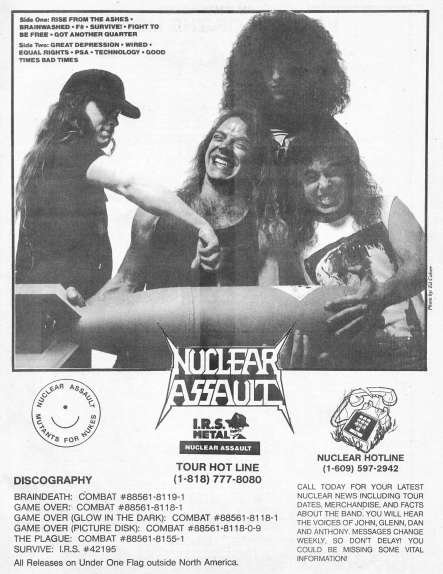 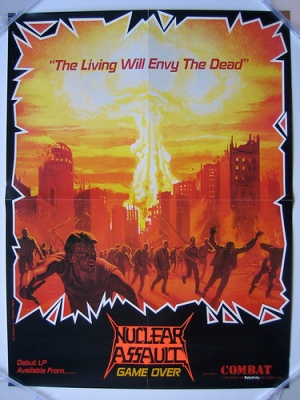 One thought on “NUCLEAR ASSAULT: Ready for Survival? [Interview]”