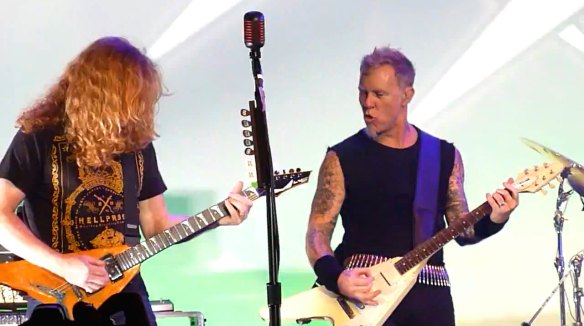 Typically the “Frozen in Time” series covers old school photos and rare memorabilia, however I thought I would highlight a recent event that took place at the Fillmore in San Francisco. In case you haven’t heard, METALLICA played four special 30th Anniversary shows with a stellar line up of guest musicians. Most notably were original guitarist Lloyd Grant (who was the guitarist on the Metal Massacre compilation), original bassist Ron McGovney (Hetfield’s childhood friend and roomie) and even guitarist Hugh Tanner who had never been on stage together.

Lloyd has never played live with the band, Ron (who was replaced by Cliff B.) hadn’t played with them for 29 years and Hugh was the peep who actually introduced James to Lars.

Jason Newsted was also invited [and showed up] to scream lead vox and thrash the bass on “Whiplash” and others. The main man himself — Dave Mustaine tore the place apart and hopefully buried the hatchet once and for all with the band.

And get this, the above icons (if that weren’t cool enough already) were not the only ones who participated. Here’s a run down of the other guests:

*Sorry if I missed anybody, I am sure there were many others.

Robert Trujillo was probably the luckiest one of all. Can you imagine being in his shoes and getting to share the stage and jam with those legends?!

I am glad that METALLICA finally removed their head out of the sand and did something worthy for a change. Most of what they did at these shows was amazing! For example they played 77 different songs in the four set lists/nights.

Finally, they acknowledged their roots, their friends, and some their idols. It was reported that Lääz Rockit and Armored Saint were the opening bands even! Talk about a kick-ass “blast from the past.”

The only one missing was the late Cliff Burton, however there was a huge pic of Cliff on the screen at various times throughout the week when some of his friends reminisced and shared stories —I thought it was grand that the band finally played “To Live is To Die” and “Orion.”

Thank you Metallica for this truly amazing retrospective showcase.

*Click on any image to view the slide show. Use arrows to navigate

James is loving the riffage ala’ Dave!

Look at that sh** eating grin

Reunited and it feels so good…

Gettin’ down to some THRASH biz!

This is one happy camper! Hugh gets onstage…

At the climax of the four night live event

Fun and smiles all around!

Lars is barely keeping up (sic)

Super rare occurrance for them to be together

Who would’ve thought these two would be onstage together?

*All stills created from Mathias Nielsen’s You Tube footage.