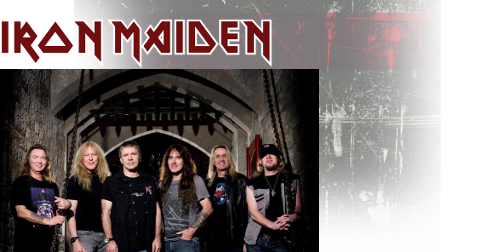 Following the massively successful Final Frontier World Tour 2010-11, IRON MAIDEN are back on the road this summer with a series of Arena, Amphitheater and Festival shows in the U.S.A. and Canada, opening in Charlotte, NC, U.S.A. on June 21, and finishing in Houston, TX, on Aug 18 [see below], to be followed by further dates around the World in 2013.

*The MAIDEN ENGLAND WORLD TOUR will closely mirror, in terms of production and content, the original 1988 concert video of the same name, shot on the “Seventh Son Of A Seventh Son Tour”. This opening section of the World Tour is the band’s most extensive visit to North America for many years and includes a number of cities the band have not played in a very long time, such as Charlotte, Atlanta, Buffalo, Indianapolis and Salt Lake City.

Moonchild, The Evil That Men Do, The Prisoner, Still Life, Die With Your Boots On, Infinite Dreams, Killers, Can I Play With Madness, Heaven Can Wait, Wasted Years, The Clairvoyant, Seventh Son Of A Seventh Son, The Number Of The Beast, Hallowed Be Thy Name, Iron Maiden.