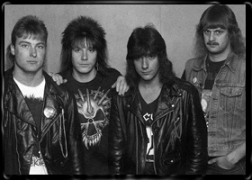 When ANACRUSIS sent us their Annihilation Complete demo last year, I knew good things were just around the corner. But, before I had the chance to praise their stunning songs in the glorious pages of Demolish ‘zine, I was sent yet another tape in the mail – only this time, it was actually a pre-release of their début album entitled Suffering Hour.

AXIS Records was the smart label that spotted their [undeniable] potential and did a great job by picking these guys. The demo was good, but I have to say that they sprung onto vinyl with new life and surprised me one more time!

This quartet from the Midwest (St. Louis) have a quite versatile + unique metal sound that shines on tracks such as: Imprisoned, Twisted Cross and a slightly more melodic approach on Fighting Evil and A World to Gain. The thrashin’ tracks like R.O.T., Frigid Bitch and Annihilation Complete/Disemboweled however, kinda’ cut their sound in the originality department a bit (with detectable sounds of Metallica, Slayer and Metal Church creeping in). I can tell they are hinting at something great overall, but due to a limited budget and time in the studio some of the tracks are not as realized as they could be.

Don’t get me wrong, they fuel-the-fire with plenty of their ‘own wood’ so-to-speak, on Butchers Block – which is my favorite track of the bunch because of it’s marching, rhythmic/anthem-like grinding! One might even hear a dash of TROUBLE in the midst of all the heavy riffing.