Back in my hard rockin’ high school days, I enjoyed the sounds of 80’s chart-toppers DOKKEN and the [criminally underrated] melodic sounds of KING’s X. When I found out that Doug Pinnick (singer/bassist from Kings X) was collaborating with all three original members of DOKKEN—minus Don Dokken, I was pretty stoked to say the least. The fact that these musicians are still around making great music in 2012 is a testament to their individual skills as players and popularity among die-hard rock/metal fans.

The group is simply called “T&N” now, which any long-time DOKKEN fan will know [un]officially stands for “Tooth and Nail.” For what it’s worth, Tooth and Nail is my favorite DOKKEN album as well. They found out another label has that name trademarked and so they had to shorten the name. Not sure if that was a good move or not as that might prove difficult to market or help brand this project. Insiders and true fans will likely figure out the connection (which is the main draw IMO); lets hope the newbies get a taste of this interesting release.

Describing this band gets a little tricky as it features former and current DOKKEN members George Lynch, Jeff Pilson and Mick Brown. Mick being the only “current” member. Not sure why the boys couldn’t work it out with Don Dokken, but he is continuing on with the official DOKKEN band and has a new album with different members that just came out last month. To be fair I haven’t heard that release yet!

The new T&N album came together from original collaborations between Pilson and Lynch for a Lynch Mob record, but morphed into this new project. Rat Pak Records will be releasing their new album entitled Slave To The Empire on October 31st.

*Tichy is the one who suggested they take the original stuff and put it together with re-recordings of Dokken classics with guest vocalists. 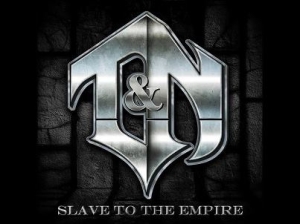 This 12 song release is described as “progressive, heavy, dark and bluesy.”