I am sure everyone’s heard all of the rumors, gossip and other goings on in the Queensrÿche camp as of late.

I’m not going to get into all the juicy details (or rumors) surrounding the band but I will say that original members Wilton, Rockenfield and Jackson, along with Parker Lundgren and singer Todd La Torre (Crimson Glory) have formed a new band called Rising West (named after a lyric from the Queensrÿche album The Warning).

Much to the delight of some fans they will be playing songs from the first five Queensrÿche albums; many the band has never played live before.

This may or may not come as a surprise to many long time QR fans regarding a stand in for Geoff Tate, however Mr.Tate (and friends) is currently on a solo tour performing select all-acoustic dates. Although he is performing  special versions of QR songs for this side project, it’s certainly not Metal or Hard Rock—so that’s got some peeps’ panties tied in a knot I suppose as his solo material is a bit more experimental.

I’ve read many favorable reviews and watched some videos online and I think this more unplugged/acoustic/loungey vibe is pretty interesting and is perhaps a much-needed departure from all things Queensrÿche; whose last few albums have been slightly average. I think the band peaked with Operation Mindcrime and I pretty much lost interest around 94′ with Promised Land. Everything up until that point was definitely stellar though! 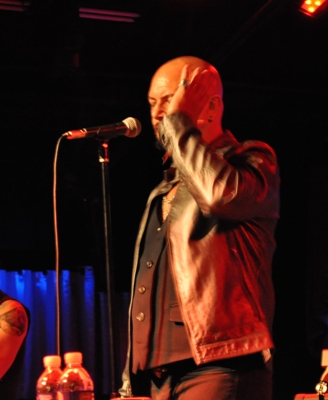 “The problem when you’re in a creative environment is keeping things fresh and invigorating, and after working with the same people for twenty years, it gets very difficult—You walk into the room, and everybody knows what everybody is going to do,” explains the front man. “There’s no spark of new blood, the chemistry is very tried and true, and you just keep coming up with the same ways of expressing yourself. What’s nice about doing a side project with new people, is that it’s a whole new breed, and a bunch of new ideas, musical backgrounds, emotional baggage, and whatever else it takes to create. It’s a whole new set of parameters, so it’s all new, everyone has ideas you haven’t heard before, and everyone is throwing them against the wall. It takes on a whole new life.”

Let me remind all of the online gossipers and media outlets who like to sensationalize and or throw gas on the fire; Queensrÿche still have several dates scheduled throughout the summer on their 30th Anniversary Tour and just came off the heals of two pretty high profile gigs at the recent M3 Festival and Rocklahoma Festival.

Only time will tell, but I think it’s pretty cut n’ dry; Geoff is doing his solo side project (and the above QR dates) and so the remaining members wanted to keep on playing and creating. I am sure they just don’t wanna’ sit around and rest on their laurels. Just as G.T. likes to experiment around with various projects and other business ventures (he has recently introduced his own signature red wine called Insania), the band wants to make some new music and have some fun as well. And what’s wrong with that? More power to them.

So, contrary to popular belief these are merely side projects and “biz as normal” according to band publicist [Jeff Albright]:

“There’s really no ‘situation’ other than the fact that Geoff Tate is concentrating on his acoustic solo performances this summer while the other members of the band have formed a new outfit called Rising West with Todd La Torre of Crimson Glory. Everyone wants to stay busy, try new things and do what they do best . . . and, of course, that’s rock in front of the masses. Queensrÿche are slated to perform select dates throughout the year.”

Even new RISING WEST vocalist Todd La Torre says that despite rumors, he is not leaving Crimson Glory!

“I am embarking on another musical endeavor with the members of Queensrÿche. I am proud and honored to be a part of this!” Todd stated. “Crimson Glory is still writing new material for our record, DO NOT WORRY. This is going to be an amazing new chapter. Thank you for all of your support!”

HISTORY in the making? 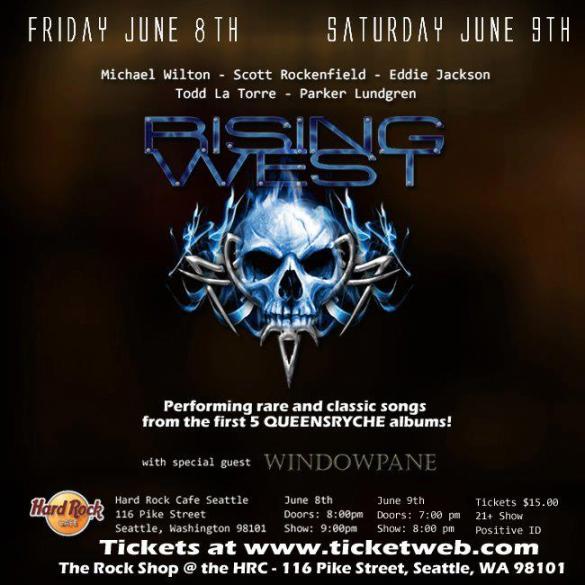 Be a part of HISTORY in the making…

“On Friday June 8th and Saturday June 9th, the core members of Queensrÿche will debut their new band “Rising West” at the Hard Rock Café in Seattle WA. Rising West features Michael Wilton, Eddie Jackson, Scott Rockenfield, and Parker Lundgren of Queensrÿche, with powerhouse vocalist Todd La Torre of Crimson Glory. The band will be performing rare and classic hits from the first 5 Queensrÿche albums and plan on hitting the studio sometime early summer to begin recording their first release.”

*If you enjoyed the article you may like to read the worldwide exclusive interview one of our foreign correspondents conducted for Demolish with Geoff Tate before the first Operation Mindcrime was even released!