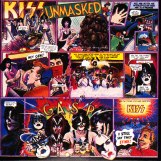 We’re going way back to 1980 for this one folks. I had actually forgotten all about these cool little items until one of my old school Metal buddies brought these to my attention recently. Thanks Patrick!

It’s a little 3″ square miniature bubble gum pack that was made to look like miniature record albums. Chu-Bops were made by a company called Amurol Products who were located outside of Chicago (in Naperville) IL.

If you were a kid in the 80’s (and were sick of collecting baseball cards perhaps) and were perusing the candy isle at your local store, then this would have caught your attention for sure. I know I chewed my fair share of those pink “mini-LP” shaped gum sticks. At age thirteen, I guess I really didn’t consider them “collectible” in the same way that I cherished my KISS card collection. BTW the gum was very similar to what you get inside the sports card packs during the same time frame.

Here are a two examples: 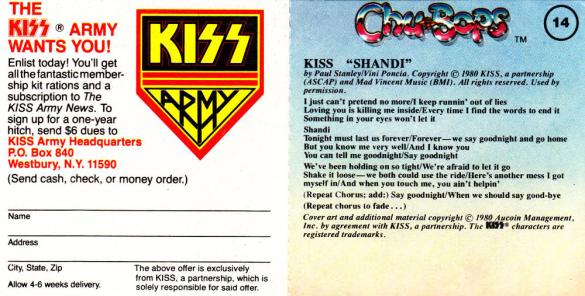 As you can see from the pics, each mini album included the lyrics to the album’s best-selling single on the back cover (in addition to the bubblegum inside) 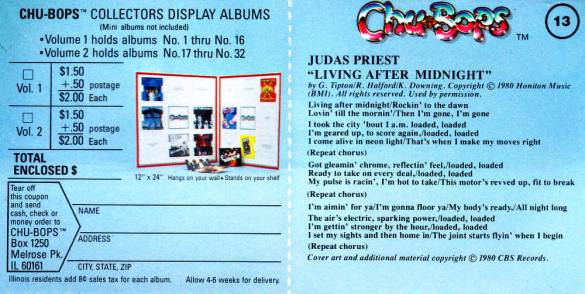 They also had these spiffy 12″ X 24″ collectors display albums (see above) that you could buy or save up enough coupons to order. You could also hang these on your bedroom wall or just stand on your book shelf!

Notice the fine print on the packages stated that IL. residents had to add $0.08 to cover sales tax for each album! Priceless.

FF to 2010 and there is a big-time demand for some of these collectibles. If you should run across these then I recommend you buy on site, however, please do not chew the gum inside! I know I should not have to say that but I can just see some stoner Metal fans [with the munchies perhaps] jonesin’ to pop the little vinyl gum “record” into their mouth.

Yes folks, they did in fact really look like mini-records [grooves and all]. Peep the pic above (I am not quite sure why, but my trusty Canon scanner rendered the pink gum more like a “reddish” color). Oh well, who said nostalgia was ever perfect?

*When Chu-Bops first appeared in stores they were $0.29 cents per “album”, and the special collectors editions (Elvis, Beatles and Rolling Stones) were only $0.33 cents per “album”. If you are an avid fan or casual collector you might like to know these same 3″ X 3″ gum pieces are currently selling anywhere from to $4 to as much as $8 per piece, depending on their rarity and condition.

A Complete “Box Set” of Elvis, The Stones and The Beatles are currently selling at auctions anywhere from $300 to $500 Dollars per boxed set (each “Box Set” contains 64 mini albums).